In up trends, the harami consists of a large white candle followed by a small white or black candle (usually black) that is within the previous session’s large real body.

Bearish Harami is a two candlestick pattern composed of small black real body contained within a prior relatively long white real body. The body of the ﬁrst candle is the same color as that of the current trend. The open and the close occur inside the open and the close of the previous day. Its presence indicates that the trend is over.

The bears open the price lower than the previous close, after a strong uptrend has been in effect and after a long white candle day. The longs get concerned and start proﬁt taking. The price for the day ends at a lower level. The bulls are now concerned as the price closes lower. It is becoming evident that the trend has been violated. A weak day after that would convince everybody that the trend was reversing. Volume increases due to the proﬁt taking and the addition of short sales. 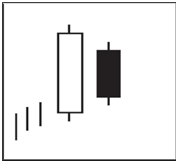