A candlestick chart pattern in which a large candlestick is followed by a smaller candlestick whose body is located within the vertical range of the larger body. In downtrends, the harami consists of a large black candle followed by a small white or black candle (usually white) that is within the previous session’s large real body. This pattern signiﬁes that the immediately preceding trend may be concluding, and that the bulls and bears have called a truce.

The Harami is a commonly observed phenomenon. The pattern is composed of a two candle formation in a down-trending market. The color ﬁrst candle is the same as that of current trend. The ﬁrst body in the pattern is longer than the second one. The open and the close occur inside the open and the close of the previous day. Its presence indicates that the trend is over.

The Harami (meaning “pregnant” in Japanese) Candlestick Pattern is a reversal pattern. The pattern consists of two Candlesticks. The ﬁrst candle is black in color and a continuation of

the existing trend. The second candle, the little belly sticking out, is usually white in color but that is not always the case. Magnitude of the reversal is affected by the location and size of the candles.

After a strong down-trend has been in effect and after a selling day, the bulls open at a price higher than the previous close. The short’s get concerned and start covering. The price for the day ﬁnishes at a higher level. This gives enough notice to the short sellers that trend has been violated. A strong day i.e. the next day would convince everybody that the trend was reversing. Usually the volume is above the recent norm due to the unwinding of short positions.

When the second candle is a doji, which is a candle with an almost non-existent real body, these patterns are called “harami crosses.” They are however less reliable as reversal patterns as more indecision is indicated. 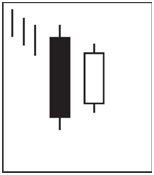 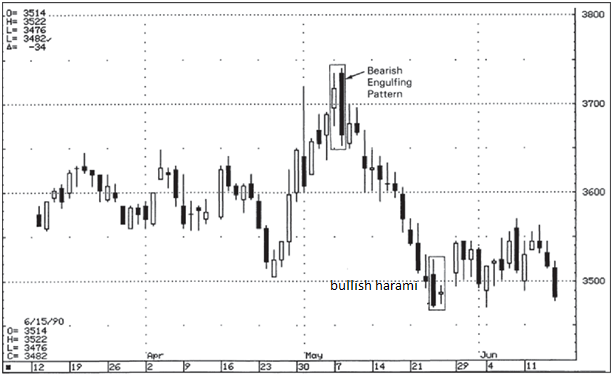