Introduction
Dow Theory is named after Charles H Dow, who is considered as the father of Technical Analysis. Dow Theory is very basic and more than 100 years old but still remains the foundation of Technical Analysis.
Charles H Dow(1851-1902) ,however neither wrote a book nor published his complete theory on the market, but several followers and associates have published work based on his theory from 255 Wall Street Journal editorials written by him. These editorials reﬂected his belief on stock market behavior. Some of the most important contributors to Dow Theory are
a. Samuel A. Nelson- He is the ﬁrst person to use the term Dow Theory and he selected ﬁfteen articles by Charles Dow for his book The ABC of Stock Speculation.
b. William P. Hamilton-He wrote a book titled The Stock Market Barometer which is a comprehensive summary of the ﬁndings that Charles H Dow and Samuel A. Nelson have gathered.
c. Robert Rhea- He wrote a book titled The Dow Theory.

The Dow Theory is made up of six basic principles. Let’s understand the principles of Dow Theory.

The ﬁrst principle of Dow Theory suggests that stock price represents sum total of hopes, fears and expectation of all participants and stock prices discounts all information that is known about stock i.e. past, current and above all stock price discounts future in advance i.e. the stock market makes tops and bottoms ahead of the economy.

It suggests stock market discounts all information be it interest rate movement, macroeconomic data, central bank decision, future earnings announcement  by  the  company  etc.  The only information which stock market does not discount is natural calamities like tsunami, earthquake, cyclone etc.

Dow Theory says stock market is made up of three trends 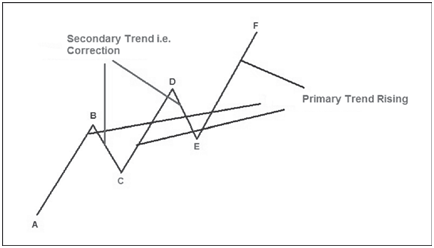 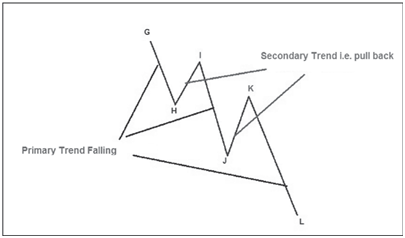 The Dow Theory says that the accumulation phase is made up of buying by intelligent investor who thinks stock is undervalued and expects economic recovery and long term growth. During this phase environment is totally pessimistic and majority of investors are against equities and above all nobody at this time believes that market could rally from here. This is because accumulation phase comes after a signiﬁcant down move in the market and everything appears at its worst. Practically this is the beginning of the new bull market.

The participation phase is characterized by improving fundamentals, rising corporate proﬁts and improving public sentiment. More and more trader participates in the market, sending prices higher. This is the longest phase of the primary trend during which largest price movement takes place. This is the best phase for the technical trader.

The distribution phase is characterized by too much optimism, robust fundamental and above all nobody at this time believes that market could decline. The general public now feels comfortable buying more and more in the market. It is during this phase that those investors

who bought during accumulation phase begin to sell in anticipation of a decline in the market. This is time when Technical Analyst should look for reversal in the trend to initiate sell side position in the stock market.

Three phases of primary trend would be clearer from (Figure 5) 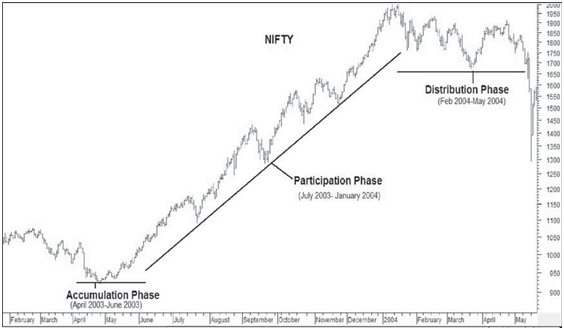 Fourth Principle: Stock Market Indexes Must Conﬁrm Each Other

Dow felt these two indexes would reﬂect true business condition within the economy.

.The basic concept behind this is that if production is increasing then transportation of goods to customer should also increase i.e. performance of companies transporting goods to consumer should improve. According to Dow Theory, two averages should move in the same direction and rising Industrial Index is not sustainable as long as Transportation Index is not rising.

Under Dow Theory, a reversal from a bull market to bear market or vice versa is not signaled until and unless both indexes i.e. Industrial Index and Transportation Index conﬁrm the same.

In simple wors, if one index is conﬁrming a new primary uptrend but another index remains in a primary downtrend, then there is no clear trend.

Dow Theory says that trend should be conﬁrmed by the volume. It says volume should increase in the direction of the primary trend i.e.

Basically volume is used as a secondary indicator to conﬁrm the price trend and once the trend is conﬁrmed by volume, one should always remain in the direction of the trend.

As we are dealing in stock market which is controlled by only one “M” i.e. Money and this money ﬂows very fast across borders. Hence stock prices do not move smoothly in a single line, one day it’s up next day it might be down.

Basically Dow Theory suggests that one should never assume reversal of the trend until and unless clear reversal signals are there and one should always trade in the direction of the primary trend.

It’s Dow Theory which gave birth to concept of higher top-higher bottom formations and lower top-lower bottom formations which is the basic foundation of Technical Analysis. This helps investors to improve their understanding on the market so that they could succeed in their investment/trading decisions. Most of the technical analysts follow this concept and if you go through any technical write up, you would deﬁnitely ﬁnd this concept.