Hammer is a one candle pattern that occurs in a downtrend when bulls make a start to   step into the rally. It is so named because it hammers out the bottom. The lower shadow of hammer is minimum of twice the length of body. Although, the color of the body is not of much signiﬁcance but a white candle shows slightly more bullish implications than the black body. A positive day i.e. a white candle is required the next day to conﬁrm this signal.

The market has been in a downtrend, so there is an air of bearishness. The price opens and starts to trade lower. However the sell-off is abated and market returns to high for the day as the bulls have stepped in. They start bringing the price back up towards the top of the trading range. This creates a small body with a large lower shadow. This represents that the bears could not maintain control. The long lower shadow now has the bears questioning whether the decline is still intact. Conﬁrmation would be a higher open with yet a still higher close on the next trading day. 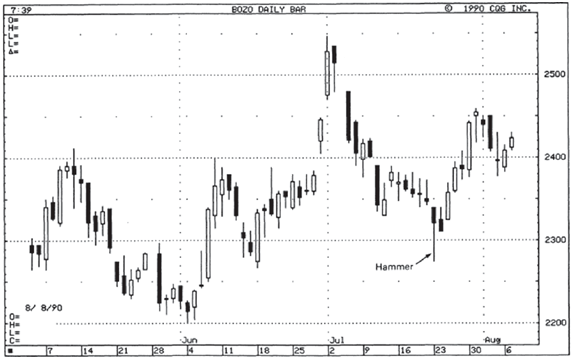