A Head and Shoulders (Top) is a reversal pattern which occurs following an extended uptrend forms and its completion marks a trend reversal. The pattern contains three successive peaks with the middle peak (head) being the highest and the two outside peaks (shoulders) being low and roughly equal. The reaction lows of each peak can be connected to form support, or a neckline 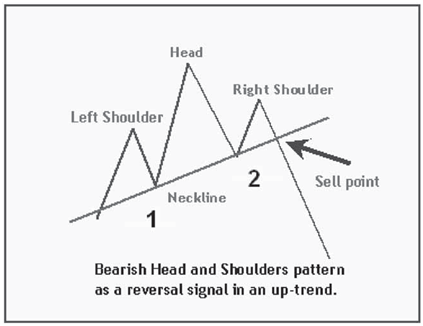 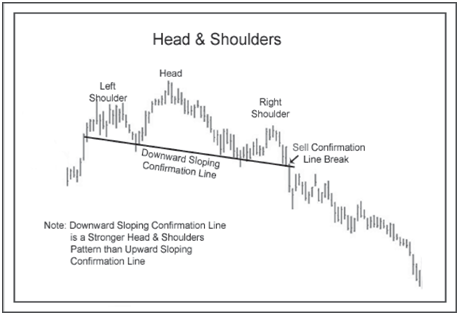 As its name implies, the head and shoulders reversal pattern is made up of a left shoulder, head, right shoulder, and neckline. Other parts playing a role in the pattern are volume, the

breakout, price target and support turned resistance. Lets look at each part individually, and then put them together with some example 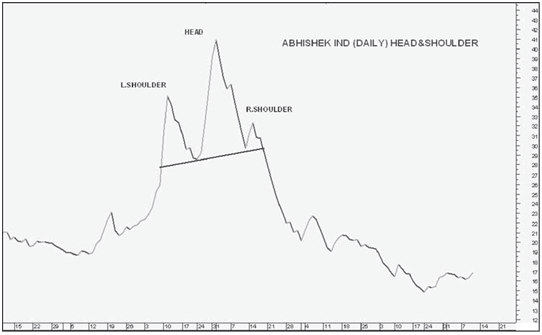 The price target D to F. This is provided by the conﬁrmation of the formation (by breaking through the neckline under heavy trading volume). This is equal to the range from top of the head to neckline.

Some important points to remember

The head and shoulders bottom is the inverse of the H&S Top. In the chart below, after a period, the downward trend reaches a climax, which is followed by a rally that tends to carry the share back approximately to the neckline. After a decline below the previous low followed by a rally, the head is formed. This is followed by the third decline which fails to reach the previous low. The advance from this point continues across the neckline and constitutes the breakthrough. 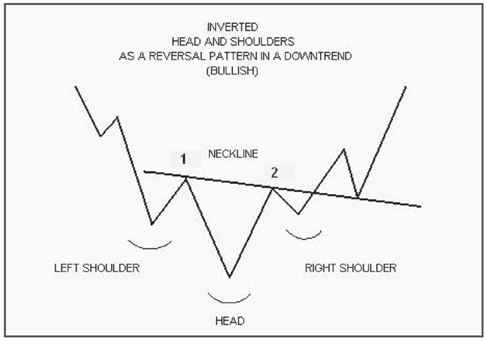 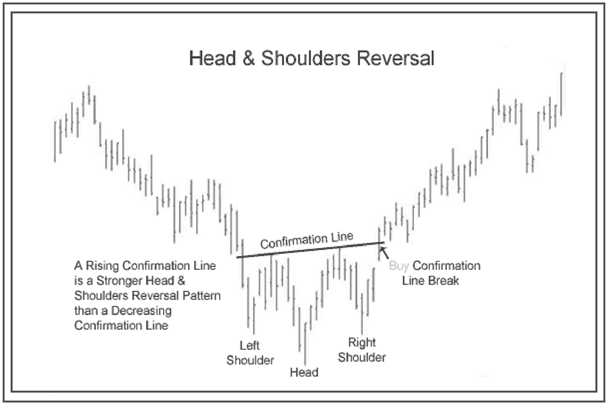 The main difference between this and the Head and Shoulders Top is in the volume pattern associated with the share price movements.

The volume should increase with the increase in the price from the bottom of the head and then it should start increasing even more on the rally which is followed by the right shoulder. If the neckline is broken but volume is low, you should be skeptical about the validity of the formation.

As a major reversal pattern, the head and shoulders bottom forms after a downtrend, and its completion marks a change in trend. The pattern contains three troughs in successive manner with the two outside troughs namely the right and the shoulder being lower in height than the middle trough (head) which is the deepest. Ideally, the two shoulders i.e. the right and the left shoulder should be equal in height and width. The reaction highs in the middle of the pattern can be connected to form resistance, or a neckline.

The price action remains roughly the same for both the head and shoulders top and bottom, but in a reversed manner. The biggest difference between the two is played by the volume. While an increase in volume on the neckline breakout for a head and shoulders top is welcomed, it is absolutely required for a bottom. Lets look at each part of the pattern individually, keeping volume in mind:

Without the proper expansion of volume, the validity of any breakout becomes suspect. Volume can be measured as an indicator (OBV, Chaikin Money Flow) or simply by analyzing the absolute levels associated with each peak and trough.

Volume levels during the second half of the pattern are more important than the ﬁrst half. The decline of the volume of the left shoulder is usually heavy and selling pressure is also very intense. The selling continues to be intense even during the decline that forms the low of the head. After this low, subsequent volume patterns should be watched carefully to look for expansion during the advances.

The advance from the low of the head should be accompanied by an increase in volume and/or better indicator readings (e.g. CMF > 0 or strength in OBV). After the formation the

second neckline point by the reaction high, there should be a decline in the right shoulder accompanied with light volume. It is normal to experience proﬁt-taking after an advance. Volume analysis helps distinguish between normal proﬁt-taking and heavy selling pressure. With light volume on the pullback, indicators like CMF and OBV should remain strong. The most important moment for volume occurs on the advance from the low of the right shoulder. For a breakout to be considered valid there needs to be an expansion of volume on the advance and during the breakout. 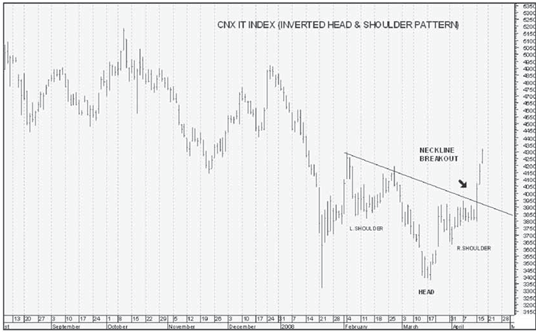 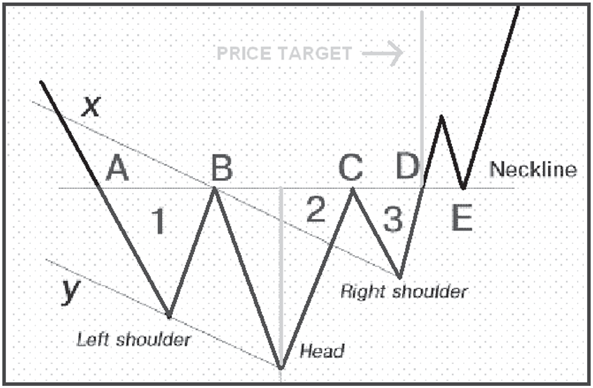 Some important points to remember: